Tsubaki Sawabe (澤部 椿, Sawabe Tsubaki?) is one of the main characters of the Shigatsu wa Kimi no Uso series. She is a third-year at Sumiya Junior High School.

Tsubaki has straight chin-length brown hair that curls up at the ends where it is parted down the middle and glowing hazel eyes.

Tsubaki often wears the Sumiya Junior High School uniform, which consists of a blue shirt, a gray blazer and short plaid grey skirt, a red and white striped necktie, navy stockings and brown loafers. She's also seen wearing her softball uniform which consists of a loose white short-sleeved shirt with a red long-sleeved turtleneck shirt underneath and red shorts with a white stripe on each side. She also wears a white baseball cap which she wears backward and ties her hair into a small ponytail.

Tsubaki is a very kind, caring, outgoing girl who is always willing to help out her friends in their troubles. She can also be seen to get defensive of her female friends, as she was upset when Ryota Watari dumped one of them. She is also adventurous, sometimes to the point of doing dangerous things. Despite her calm and kind nature, Tsubaki is easily angered. In her childhood, when Kousei Arima was learning the piano and was never able to go out to play with her, she would often make things for him and reassured him when his mother got rid of his cat he had found. She is seen as not very girly, having short hair and being a fan of sports. Many of her classmates called her creepy because of her personality and looks, leading her to start thinking that way about herself. She was also thought of as oblivious to her own feelings as seen when she started to like Kousei, her best friend knew it all along and even dropped hints, such as the fact that she was always talking about him, worrying about him and watching out for him. For example, when Kousei was injured, Tsubaki was willing to carry Kousei on her back, despite being hurt herself. Also, Watari and Kaori Miyazono were aware of her feelings for Kousei but didn't say anything.

Tsubaki secretly likes Kousei but does not possess the courage to confess to him. She has a hard time realizing her own feelings. She tries to hide her real emotions with a smile but cries in emotional outbursts. She is possessive of people who mean a lot to her (e.g. Kousei) and would respect any decision they want to make, even if it upsets her. She cares about Kousei enough to pick a high school near his so she can still see him and be there by his side.

Tsubaki is a very athletic person, since she was young, and would always invite Kousei Arima (who was usually preoccupied with piano lessons) to play with her outside. She would often convince him to do daring stunts, sometimes even dangerous things which further developed her adventurous and outgoing personality. She is skilled in sports and is a very active member on her softball team in school. It is also seen that her mood can influence her skills, like when she's angry, she tends to play better and more violently, and when she's sad, she tends to miss more shots and lose her concentration.

In addition, while Tsubaki was seen as the person who always failed, she once got a B on a test described as 'hard' by all of the other students in her class.

Tsubaki is Kousei Arima's childhood friend who has always gone to his performances and cheered him on. Tsubaki would often invite Kousei to play outside but due to his practice time with his mother, Kousei could rarely participate. Being with Kousei for a long time, Tsubaki gradually took on the role of an "older sister". Kousei was that "hopeless little brother she had to take care of". She would often prepare gifts for Kousei and cheer him up when he was sad, such as when his mother abandoned his pet cat he had found and he couldn't find him. Rather than being interested in music, Tsubaki was always athletic.

Tsubaki is on the softball team in junior high school. She hits a softball into the glass window of the music room, shattering the glass, and injuring Kousei Arima in the process. Arriving at the music room, Tsubaki peers into the room and finds Kousei lying motionless on the floor. Panicking, she attempts to retrieve the softball and leave without any trouble, but Kousei stirs and realises what had happened. As he reaches for a glass shard, Tsubaki immediately holds his hand back, warning him that he could’ve gotten cut. Just then, Watari snaps a photo of them and teases them. They walk home together, and part ways as they go to their houses. Tsubaki receives a phone call.

Kousei was a close friend of Tsubaki's since childhood. The two are neighbors and they have an extremely close relationship. Ever since childhood, Tsubaki constantly worries about Kousei, saying that she simply feels the need to look out for him. Although she initially refers to Kousei as her "kid brother", she later realizes that she has feelings for him, and she is heartbroken when she believes that he will be leaving her to pursue his dream of becoming a pianist. However, after Kaori's death, Tsubaki decides to stay by Kousei's side and follow him.

Watari was Tsubaki's other close friend since childhood. They share a deep love for sports (Tsubaki plays softball while Watari plays soccer). Watari understands Tsubaki's feelings the most out of all her friends, having realized her true feelings for Kousei long before anyone else, including Tsubaki herself.

Tsubaki's close friend and confidant, Nao is shown to be very observant with her, even noticing how she started dating Saitou as an excuse to hide her love for Kousei. Tsubaki tends to brush off Nao's remarks that she has to be honest with herself about her feelings, but is eventually forced to take Nao's advice.

Kaori is Tsubaki’s classmate, friend, and unbeknownst to her, love rival. Although Kaori secretly likes Kousei, Tsubaki takes no notice of this, and has a close friendly relationship with her.

Tsubaki is depicted frequently communicating with "Saitou-senpai" as to how she calls him through messaging and calling each other via phone. She uses her relationship with him to hide her feelings for Kousei, however, she actually did like Saitou to an extent. When Tsubaki’s feelings for Kousei became apparent, Tsubaki and Saitou broke up. Their break up was also caused by their similarities, and the fact that Saitou fancied the manager of his baseball club.

(To Kousei Arima) "You do too have a soul, Kousei. It's just that you're good at hiding it. So good, you can't even find it yourself. So I'm going to find it for you. So you won't lose your way, so you won't have regrets... I'll stay by your side forever. After all, I know everything there is to know about you."[2]

(Monologue) "Even though I'm upset that I lost... Even though I'm depressed... Even though my ankle hurts and my eyes are stained with tears. I don't think I've ever felt worse. so why do the stars look so bright tonight? The scent of the music room in his hair. The sound of his slightly ragged breathing. His shoulder, warm and wet with tears. I am by his side. I wish we could live in this moment forever."

Tsubaki in the opening 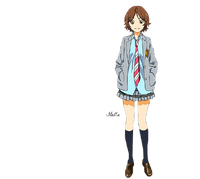