Takeshi Aiza (相座 武士, Aiza Takeshi) is a character appearing in the Shigatsu wa Kimi no Uso series. He is a Year 9 student at Kurumi-Gaoka High School and the older brother of Nagi Aiza.

Takeshi is a tall boy with spiky blond hair, blue eyes and he usually wears a stoic expression on his face.

He is usually seen in his formal attire, which consists of a smart blue suit and black shoes, but is also shown in casual attire at times, consisting of a white t-shirt with an artistic design on it, and jeans.

Takeshi is a honest and straightforward guy who is very upfront about his rivalry and hatred at first for Kousei Arima. This hatred is later revealed to be an admiration of Kousei and how he looked up to Kousei as a hero. Takeshi looks up to Kousei to the extent of rebuking Kousei when he did not meet his expectations as a pianist. He then starts hating him because Kousei and his little sister, Nagi, played a duet.

Takeshi is one of the best piano players of his generation, as mentioned for being invited to Europe for competitions and winning the majority of recent piano competitions in Japan.

It was shown that prior to the storyline, Takeshi and Emi Igawa are sitting together complaining about the "emotionless" Kousei Arima after losing to him in a piano competition. The rest of the crowd points out that Takeshi and Emi are head and shoulders above the rest of the competition, which makes Kousei all the more invincible for beating the two. In the storyline, it is shown that Takeshi looked up to Kousei as a hero, and constantly practiced in order to surpass Kousei.

Nagi is Takeshi's younger sister; she is his junior by one year. She idolizes Takeshi and started playing piano to gain his attention, to show him that she was more capable than he thought.

Kousei is Takeshi's biggest rival and "hero", as Takeshi states it, since childhood. Takeshi first met Kousei in third grade.[1] He often complains about how he lost to Kousei. As the story progresses, the two get closer together, becoming friends. Before the final competition, he is shown worrying over Kousei's health.

Emi is Takeshi's rival, who tries to calm him down when he gets angry about losing to Kousei. He is often seen hanging out with her, complaining about how he lost to the “emotionless” Kousei after losing to him in a competition. He is shown to be slightly intimidated by Emi’s erratic mood swings.

Izumi is Takeshi’s girlfriend. She gets mad at him when he tries to use the piano as an excuse to miss a date. After Nagi and Kousei’s performance, she tries to convince him that his sister is very gifted, and that she is more than what she seems to him. 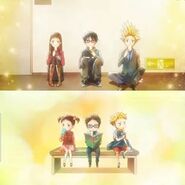 Takeshi with Emi and Kousei 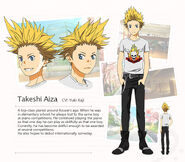 Takeshi at the Maihou Competition

Retrieved from "https://shigatsu-wa-kimi-no-uso.fandom.com/wiki/Takeshi_Aiza?oldid=18764"
Community content is available under CC-BY-SA unless otherwise noted.