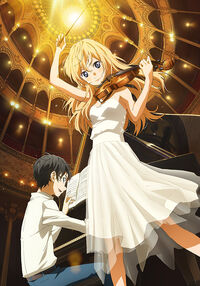 Your Lie in April (四月は君の嘘, Shigatsu wa Kimi no Aso?) is the series of both the manga and anime.

The English translation of the manga was first published on July 7, 2012. It was written by Naoshi Arakawa and published by Kodansha. There are currently 11 volumes in the manga series.

The anime adaptation was released on October 9, 2014. It was directed by Kyōhei Ishiguro, written by Takao Yoshioka and the music was composed by Masaru Yokoyama.

The title "Shigatsu wa Kimi no Uso" ("Your lie in April") has several origins. "Shigatsu", or "April", comes from the phrase Kousei uses to describe Kaori ("She exists inside spring"), spring being used to describe and symbolize Kaori throughout the show; the "lie" can be deduced from two things: Kaori claiming at the beginning to like Watari, when in fact she was in love with Kousei, and her promise "let's play again together", when in actuality she knew she would die before she got the chance. Alternatively, it could refer to the Kaori's claim that all musicians are scared when they go on stage, but they feign confidence and thus performance itself is a lie: "We're all just faking it, some of us better than others, but you put your music on the stand and play anyhow because that's the way you tell the most beautiful lie of them all."

The adaptation was produced by A-1 Pictures and ran for 22 episodes. The series has also received one OVA episode.

Piano prodigy Kousei Arima dominated the competition and all child musicians knew his name. But after his mother, who was also his instructor, passed away, he had a mental breakdown while performing at a recital that resulted in him no longer being able to hear the sound of his piano even though his hearing was perfectly fine. Even two years later, Kousei hasn’t touched the piano and views the world in monotone, and without any flair or color. He was content at living out his life with his good friends Tsubaki and Watari until, one day, a girl changed everything. Kaori Miyazono is a pretty, free spirited violinist whose playing style reflects her personality. Kaori helps Kousei return to the music world and show that it should be free and mold breaking unlike the structured and rigid style Kousei was used to.

Shigatsu wa Kimi no Uso has been shown to cause a number of phenomena to occur in Japan, as noted by the staff behind the anime adaptation. The cause of these phenomena has been dubbed the "Kimi Uso Effect" by the anime's director, due to the show being the cause of people's actions.

Following the airing of the twenty-first episode of the anime, it was widely reported that Canelé was selling out across Japan.[1] This is speculated to be because of Canelé being Kaori Miyazono's favorite treat, and because fans wanted to show their support for the character, who was undergoing surgery at the time.

Following the airing of the twenty-second episode of the anime, "Chopin: Ballade No. 1 in G minor, Op. 23" rose to the top of the classical music charts in Japan. This is speculated to be due to it being the song that Kousei performed during the episode, and the song in which he bid farewell to Kaori.[2]

Community content is available under CC-BY-SA unless otherwise noted.
Advertisement