Episode 01: Monotone/Colorful
Saki Arima (有馬早希 Arima Saki) is a supporting character of the Shigatsu wa Kimi no Uso series. She was the wife of Takahiko Arima and the mother of Kousei Arima. Saki was a well-known pianist across Japan before her death, that severely affected Kousei's playing style for the next two years, because of the way she treated Kousei in his past.

Saki has shoulder-length brown hair and dark eyes. She was either depicted with no eyes at all or she has brown eyes. In some parts, she is seen with nasal canulla used to deliver supplemental oxygen for her illness and she is usually seen sitting in a wheelchair.

Although Saki was strict, harsh, and horribly abusive towards Kousei Arima, it came from a place of misguided love. While Kousei believed she hated him after he wished her dead and imagined her ghost taunting and punishing him for his wish, he realised that it was all in his head and his mother loved him very much. Before her death, she was shown to fret over whether Kousei would get hurt or manage to make a living.

Saki is Kousei Arima's mother who teaches him to play the piano after Hiroko Seto noticed his genius. While she did not plan to make Kousei a pianist at first, her realization of Kousei's talents and her own illness made her decide to give Kousei a foundation in playing piano in order to better able to find his own style, and make a living, afterwards. She died before Kousei's qualification to what supposedly was his first competition in Europe. She was often seen when Kousei was playing his piano, though he admitted to himself that her haunting him was just an excuse for himself. 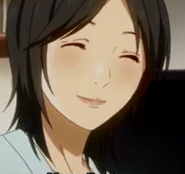