Ryōta Watari (渡 亮太 Watari Ryōta) is one of the main characters of the Shigatsu wa Kimi no Uso series. He is a student attending Sumiya Junior High School who is the captain of the football team.

Watari has medium-length light brown hair that is slightly swept to the right (which makes him to look easygoing and approachable) and light caramel brown eyes. He is known for being good looking, which he uses to his advantage. Watari is of average height and build for a junior high student his age. He is also quite lean. His uniform is shown to be pictured slightly disheveled, as his tie is loose around his neck and his shirt not being tucked in, making girls swoon for him. 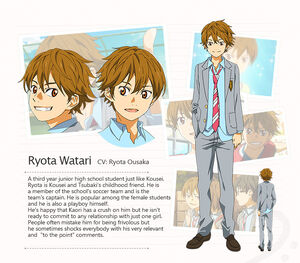 Watari is a kind, outgoing and friendly boy. He's a bit of a play-boy, as he seems to prefer girls who are "cute", demonstrated as he comments that when he sees Kaori Miyazono for the first time he stated that Tsubaki Sawabe did a good job on finding a cute looking girl. Furthermore, when introduced to Hiroko Seto, he talks to her immediately, calling her "Onee-sama" and telling Kousei Arima that she's cute. Watari also seems chill on the outside shown when he loses the last game of his middle school career and comforts his team mate. Really Watari is fragile, despite his somewhat superficial and carefree attitude. He also supports his friends as shown when Arima confesses to Watari. Watari tells Arima that "it is up to the girl to decide whether you are worth it or not". He supports Arima falling in love with Kaori even though Watari quite likes her.

Watari was a close friend of Kousei Arima and Tsubaki Sawabe who regularly spent time together where they were great friends. He cared for his friends, as well as Kousei’s mother, whom he bought scented erasers for, during her hospitalization.

Watari was the captain of the Sumiya Junior High School football team by his early years in junior high school. Tsubaki Sawabe introduces him to Kaori Miyazono, who he is instantly smitten with. Upon discovering that she was a violinist who had to compete in a competition in a few minutes, Watari, along with Kousei Arima and Tsubaki, quickly made their way to Towa Hall to watch her performance.

Watari is very skilled at football who is seen easily dribbling past people in a junior high soccer tournament game, but he can also be distracted at times; mainly when his friends are around, or just things to get easily distracted by in general. Due to his good looks, he is also known as a "chick-magnet". Also, By the way, he has the ability to make people laugh.

Community content is available under CC-BY-SA unless otherwise noted.