Nagi Aiza (相座 凪, Aiza Nagi?) is a supporting character who appears in the Shigatsu wa Kimi no Uso series. She is the younger sister of Takeshi Aiza, and is a Year 7 student at Kurumi-Gaoka Junior High School. Nagi is a piano student of Kōsuke Oka. She requests to study under Hiroko Seto but, under her direction, instead becomes Kousei Arima's first student.

Nagi is characterised by her blond pigtails and golden brown eyes, often seen wearing her school uniform. She is described as very cute and pretty. In her early teens, she has yet to develop a woman's body and height. She establishes the cute little sister character in the story. Hiroko Seto also commented that she looked a lot like her brother because of her hair.

During her school performance, Nagi wore a formal green dress with a bow to tie it off in the back, and a black choker with a white flower around her neck. Her hair is worn in a high side ponytail.

Nagi is stubborn and somewhat childish. She is also cunning, and hard-headed.

Nagi maintains a realistic look in life and repeatedly testifies her hate for cliché. Because of her unerring piano skills, she is slightly arrogant and claims herself as the "Angel of Kurumi Junior High". Nagi also appears to have a distaste for anyone who refers to their superiors without the appropriate honorific, as shown when Miike did not refer to Kousei Arima as his Sensei or Senpai, instead addressing him directly as "Arima".[1]

Nagi is often seen to have a brother-complex, seeming to be completely fixated on her brother Takeshi. She idolizes her brother, and says she's "constantly chasing after him, but he is always ahead of her". This complex has driven her to follow in his footsteps in order to get him to notice her and to also stop her brother's own fixation on Kousei.

Nagi sets up a plan to sabotage Kousei, resulting in her being "knocked out", and Kousei having to bring her to Hiroko Seto's house. She then proceeds to ask Hiroko to teach her. Hiroko labels it as rude to her current instructor. Yet Hiroko asks her to play something. Nagi shows she is a brilliant player, and Hiroko agrees to teach her. She then shifts the position to Kousei, much to Kousei's and Nagi’s dismay. Kousei corrects every aspect of Nagi's playing, which makes Nagi upset and retorts how he thinks he knows it all. In the later parts of the anime, Nagi warms up to Kousei, comforting and trying to make him smile while he was upset[2]. Nagi holds deep respect for Kousei and admires him for his piano playing skills.

When she was younger, she saw her elder brother as some sort of hero. They often played together and had a close relationship, but Takeshi started to fixate on Kousei Arima. Because of that, he started to practice hard and the strong bond between the two became thinner over the years. In order to be closer to her brother and gain his attention, Nagi started to play the piano. She began majoring in music in her first year at Kurumi-Gaoka Junior High School.

Nagi was taken to Hiroko Seto’s house by Kousei, after she had knocked herself unconscious by falling out of a tree. It turns out that it was part of a plan she had devised, to meet Japan’s leading pianist and make her her piano mentor. To her shock and disappointment however, Hiroko appoints Kousei as Nagi’s piano mentor instead. For the first few lessons, Kousei criticises Nagi on her inaccuracy, resulting in her running away. However, after a few lessons, Nagi realises that Takeshi was wrong about Kousei being like a robot. She gets used to Kousei, and eventually warms up to him.

After many lessons, Nagi performs a duet piece (Tchaikovsky’s “Sleeping Beauty Waltz”) with Kousei, at her school’s gala day concert. Nagi enjoys herself, and after the performance, she and Kousei get a standing ovation from the crowd. Backstage, Komugi and Satsugi hug and congratulate Nagi on her performance. Takeshi gets angry at Kousei for playing a duet with his “kid-sister”, much to Kousei’s confusion, who, at the time, didn’t know that Nagi was related to Takeshi. Nagi introduces Kousei to her older brother, and defends Kousei from Takeshi. When Nagi tells him that Kousei had been “teaching her all kinds of things”, and giving her “precious experiences”, Takeshi runs away crying, feeling like a failure of an older brother.

Nagi's older brother. He also plays the piano. She has a high opinion of her brother, and idolizes him, constantly trying to catch up to him.

Her tutor and friend. Though she is shown loathing him at first, she eventually finds out the knowledge her brother has of him is not completely true. She finds herself in him, realizing that Takeshi had been wrong all along. He "didn't have a heart of steel", and "his hands were warm when I touched them." She begins to warm up to him, as shown her thoughts and her defending him with fierce passion when Miike accuses her of her relationship with Kousei through jealousy. It is found that she eventually develops a crush on Kousei.

Nagi already had exceptional skills in piano before she became Kousei's apprentice. She was the prize winner of the Elena International Music Contest and obtained the grand prize at the Matsuno Music Contest.[3] When Seto-san asked her to demonstrate her skill, she easily performed Etude Op. 25 No. 5, the same piece Kousei played at the Maihou Competition.

During her lessons with Kousei, she blames her small hands for not being able to play in the right tempo or dynamic. Her skills improves drastically after being tutored by Kousei and can even keep up with his playing during her school festival performance.

Unlike most musicians in the story, Nagi doesn't perform for 'glory or perfection' but for obligation to become closer to her brother, and gain his attention. 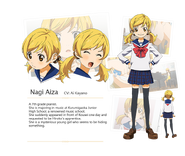