Kousei Arima (有馬 公生 Arima Kōsei) is the main protagonist of the Your Lie in April series. He is the son of Takahiko Arima and Saki Arima and a student attending Sumiya Junior High School who was the youngest winner of the Maihou Piano Competition.

Kousei is a teenage boy with short, black hair and blue eyes. He is of average height, just a bit taller than Kaori Miyazono by comparison. His school attire is marked by grey pants and coat, along with a light blue shirt and red-and-white tie. Kousei's casual clothing seems to be a dark blue polo shirt with a grey shirt over top, along with dull tan pants. (If an example for the pants is needed, just look at tan dad shorts and elongate them.)

Kousei dons a pair of glasses with thick black rims. He mainly wears his Sumiya Junior High School uniform, which consists of a red-and-white-striped necktie, blue dress shirt, grey trousers, grey blazer, and black and white sneakers, instead of brown loafers. When competing in piano competitions, Kousei wears a cobalt blue suit and a royal blue necktie. His casual attire consists of t-shirts that features English quotes (e.g. “No life is enough”), and plain trousers and dress shoes. He usually wears tucked in dress shirts for informal occasions. In bed, he wears black gloves (seen in episode one) and its unsaid why.

As a child, Kousei was a calm and obedient boy. When he is not hanging out with Ryota Watari, Tsubaki Sawabe and Kaori Miyazono, he spends most of his day alone in his thoughts. This dense characteristic makes him oblivious to what is going on around him. For instance, he does not notice the rivalry and resentment his fellow piano competitors had for him nor Tsubaki's crush on him. As well as not noticing the jealousy that Tsubaki was feeling about being separated from him, as she has always cared about him and been with him. He also stares at Kaori for long, thinking how great of a person she is, which she misinterprets as him having perverted thoughts of her.

Despite his pessimism, Kousei is a very kind person, and isn't by any means unapproachable. His genuinely kind-hearted nature is seen in his interactions with others, and he treasures his friends.

Kousei admires Kaori because she is his opposite; he wishes to become more free-spirited like her. The closer Kousei and Kaori get, the more his feelings for her deepen and the more he opens up to other people. She helps him build his confidence and successfully convinces him to perform again. This allows Kousei to learn and grow into a more confident and less depressed person.

Ever since Kousei was a young boy, he had perfect pitch where he was able to accurately replicate a piece that he had only heard once. Kousei's ability was honed through the training by his mother which led to his achievement of technical perfection at a very young age. He became the youngest person to ever win the Maihou Piano Competition, and almost got a chance to perform internationally, but as a result of Saki Arima's passing, Kousei ceased to play any longer.

Kousei became a pianist from the encouragement of his mother's close friend, Hiroko Seto after he displayed perfect pitch. Following a collapse in his mother's health, Kousei's style of learning to play the piano was drastically changed. As a result, Kousei started becoming distant from his friends and focused solely on perfecting his piano skills in an attempt to satisfy his mother and make her happy. However, he stopped playing after her passing. His mother's death resulted in his inability to hear the pieces he played. At this point, he was 11 years old and was a step away from entering the national piano competition. Following the death of his mother, he lived for two years without playing the piano and saw the world in monochrome. As a result of his mothers passing, Kousei claims that each time he plays, he feels stuck deep underwater and is unable to hear not the keys but the actual chords playing.

One fateful spring day in April, Tsubaki Sawabe had Kousei meet her and Ryota Watari in the park, to be introduced to a girl who claimed to love classical music and played some instruments. Kousei arrives at the park early, and hears a tune being played on a melodica from a distance, so he follows it, and finds a beautiful girl playing with young children. He takes out his flip phone to photograph them, but due to a misunderstanding, the girl lashes out at him, hitting him with her melodica repeatedly, and pinning him down with a recorder. When Tsubaki and Watari arrive, the former introduces the girl as Kaori Miyazono, who, after finding out that she had in fact, attacked the famed pianist Kousei Arima, apologizes immediately for her violent first impression.

Upon discovering that Kaori is a violinist, she invites them to watch her performance in the violin competition. The other three agree, and sit in the audience. After hearing the exact same piece (the “Kreutzer” by Beethoven) being played over and over again by the competitors, Kousei, Tsubaki and Watari wait eagerly for Kaori. When the time comes for Kaori’s turn, the “Kreutzer” doesn’t sound anything like what the others before her played. An astonished Kousei remarks “This is the Kreutzer, but it is no longer Beethoven’s.. Right here, right now she owns it.” After her performance, Kaori receives flowers from two little girls. Kousei compares it to something from a scene in a movie.

Saki Arima is Kousei’s deceased mother who began giving him piano lessons after being given the idea to do so by her close friend Hiroko Seto, who had recognized Kousei’s musical gift. Although she was strictly harsh when it came to his lessons, she loved him dearly. However he believed she hated him after he wished her dead after a nasty beating following a performance and he imagined her ghost taunting and punishing him for his wish. However later he realised that it was all in his head and his mother loved him very much.

Although Kousei had never met Kaori before, Kaori and her parents had always admired him since they first saw him perform. Kaori took up playing the violin hoping to perform with Kousei one day. Throughout their time together, they had many instances in which Kousei slowly gained feelings for Kaori. Each encounter had Kousei realize the importance of himself as a musician, as well as learn more about Kaori and become closer to her, something which eventually flourished into romantic feelings. However, Kousei refused to confess as he was misled to believe that Kaori was in love with Watari.

When Kaori collapsed on the day of the Gala Performance due to the sudden paralysis of her legs and received a concussion, Kousei started to doubt himself, seeing his mother in Kaori, as both of them had made a huge impact on Kousei's life, and the both of them were the reason that he played the piano. Kousei started to give up on music once again as he felt that music was the one who took away everything that was precious to him. However, after talking to Kaori about not giving up hope at the hospital, Kousei was touched by her words and decided to persevere once more in his last piano competition while Kaori was undergoing surgery. Unfortunately, Kaori was unable to pull through the surgery which led to her death, with her presumably dying on the operating table. Kousei received a letter from Kaori's parents which was written by Kaori before she underwent surgery. In the letter, Kaori expressed her love and gratitude towards Kousei and thanked him for bringing joy and meaning to her life. At the end, Kaori wrote that she was in love with Kousei, not Watari.

Kousei and Tsubaki have been best friends since the day they were born, playing together and growing up incredibly close, being best friends as well as next door neighbors (with Tsubaki callinioan angel).

Kousei and Watari have been friends since their early childhood, and played together a lot when they were kids. They go to the same junior high school and Watari is one of the few friends that Kousei can trust. Watari constantly gives advice to Kousei, backing him up when Kousei was feeling down. Watari was supposedly Kaori Miyazono's love and constantly acts lovey-dovey with her which causes Kousei to be annoyed. When Kousei tells Watari that he is in love with Kaori, he gives an advice on how to get her to like him and gives Kousei the confidence he needs to visit the ill Kaori.

Nagi is Takeshi Aiza's little sister. Despite being cheeky and devilish towards Kousei on occasion, she respected him as their friendship grew as they are hanging out more with each other and is encouraged by Kousei to learn a piece. Kousei acted as her tutor and Nagi agreed to take lessons from him every week and worked hard. It is later indirectly seen that Nagi develops a crush on Kousei.

Hiroko was the first one to find out that Kousei had perfect pitch and was a genius with the piano at a young age. Saki Arima interpreted this and decided to immediately give Kousei lessons and make him a world class pianist in her place. Later though, it is shown in her own flashback that she blamed herself for Kousei's suffering, saying that if she hadn't told Saki to turn Kousei into a pianist, he wouldn't be suffering. Because of this, she decided that she couldn't meddle with Kousei's life anymore.

After almost falling asleep from previous performances, Emi Igawa was instantly inspired by Kousei, whose performance lasted less than four minutes, as she recalled. When his performance reached its end, Emi started to burst into tears. Emi put away all of her interests and hobbies, and focused on the one and only thing she needed to top Kousei: the piano. She grew up to be close with Kousei and Takeshi as they were always competing in piano competitions and locked the spots for top three. They have a mutual relationship but she and Takeshi are angered as Kousei kept winning first place in competitions. Takeshi claims that she is somewhat “in love” with Kousei, though she doesn’t exactly express it. It is said that she wanted Kousei to remember his true self.

Kousei has a similar relationship with Takeshi to Emi with similar reasons. Takeshi respected Kousei and named him his hero but insisted that he was always a step behind Kousei, which angered Takeshi. This made him frustrated and resulted in him practicing intensely every day, quitting soccer in order to practice and focus on playing piano, and later on, became a great pianist. 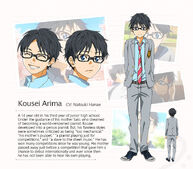 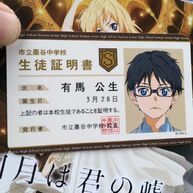 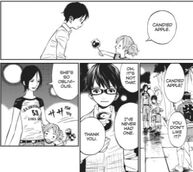