Kaori Miyazono (宮園 かをり, Miyazono Kaori?) is the main female protagonist of Shigatsu wa Kimi no Uso. She was the only daughter of Ryouko and Yoshiyuki Miyazono who was a free-spirited, gifted violinist whose playing style reflected on her personality.

She attended Sumiya Junior High School as a third-year-student and was in the same class as Tsubaki Sawabe. She first met Kousei Arima when she asked Tsubaki to set her up with Ryota Watari. As their friendship grew, she eventually began helping Kousei return to the piano world after his mother's death.

Kaori was noted to be a very beautiful teen girl whose height was average for her age and whose body was noted to be frail and delicate with wavy waist-length blonde hair and pale indigo eyes. Following Kaori's hospitalization, her hair color and skin color began to fade into a duller hue and she also wore contact lenses, which are the same color as her eyes.

As a little girl, she wore a pink dress and her hair was at chin-length. During her early years of Junior High, she wore glasses with thick black rims and tied her hair into two low pigtails.

Kaori was a friendly, encouraging and free-spirited girl who reflects her playing style with her own personality and she loved sweet foods that she had many interests. However, one thing that remains constant after meeting Kousei Arima, ever since they were children, is her passion for the violin. Kaori was independent and is more of a support for others, as well as an innovator. She puts up a smile in front of others, regardless of how she feels, in order to avoid her friends worrying about her. Kaori has an open mind and seems to have trouble settling on one thing, before moving to the next. This is shown when she used a pencil to decide which piece to perform for the competition, and when she takes up ballet, the piano and then the violin. Kaori isn’t fussed when it comes to being late (and even being a “no-show”), and easily shakes off situations that others may find serious.

While considered a great violinist from a theoretical perspective, Kaori often eschews details of the score and its historical and traditional interpretations. The judges note that her abilities far exceed the others in the competition. She wields a free-spirited style of performance that emphasized emotion and artistry over the strict interpretation of the score and the composer's intent.

When Kaori was a young girl, her class went to see a music recital, where she first saw Kousei Arima. From the moment he touched the keys and started playing, she was immediately inspired by his music.

Kaori was physically weak and underwent many surgeries. Despite so, her hospitalizations became more frequent and prolonged, which lead to her often missing school and practice. One night, possibly eavesdropping or simply walking by, she observed her mother crying in the hospital lobby. She then discovered she didn't have much time remaining to live, and shortly after she realized it herself through the recurrent hospitalizations and developing weakness.

When she realized that she would be attending the same junior high school as Kousei, she wanted to approach him. Because Tsubaki Sawabe was close friends with Kousei, she had trouble getting his attention. So she built up her courage, replaced her glasses with contact lenses (which she was too scared to wear), and became her unique self, by doing everything the way she wished to. Knowing that Tsubaki was a close friend of Kousei’s, Kaori asked her to introduce her to Ryota Watari, another one of Kousei’s close friends. This way, she would be able to get closer to Kousei.

Kaori plays with three children, attempting to summon pigeons by playing her melodica while standing atop a dome in the park. She catches a boy taking a photo of her as a gust of wind blows her dress, and immediately lashes out at him with her melodica and pins him down with a recorder. Upon realizing that she had attacked the famed pianist Kousei Arima, Kaori apologizes for her violence and is introduced to Ryota Watari by Tsubaki Sawabe as she had requested. Kaori invites the three to watch her in the preliminary round of the violin competition. The three agree and set off to Towa Hall.

When it comes to Kaori’s turn, she changes up the set-piece (Beethoven’s "Kreutzer") and turns the whole thing into her very own original score. By the end of the performance, the audience applauded and cheered tumultuously for her (much to the anger of the judge, who was not happy with what she played). After the preliminary round ended, a young girl gifted her with a bouquet of flowers. Kaori was voted “audience choice”, bringing her to the next round of the competition.

Kaori hid her illness from everyone else. This was first shown when she collapsed after her first performance with Kousei. At the time, she claimed to be anemic. However, there were many suggestions for more severe health concerns. She was shown with medication during Kousei's competition and was unable to participate in her callback round with Kousei during her prolonged hospitalization. It is later revealed that she was unable to perform with Kousei after she fell and hit her head at home. When Kousei heard from Kaori's hospitalization from Tsubaki, he rushed to visit her.

It later became obvious that her health is deteriorating rapidly and she could no longer hide her illness from her friends. Her illness began causing bouts of paralysis in her legs. Also, she suddenly fell to the ground while walking down the hallway in the hospital and she was unable to stand up again. During one of her hospital visitations, Kousei noticed that she had gotten paler and skinnier.

As Kaori's surgery date approached, she wrote a farewell letter to Kousei. On the day of Kousei's piano competition, Kaori underwent surgery. But despite the doctor's efforts, she died on the 18th of February at the age of fourteen. At her funeral, her letter was given to Kousei by Yoshiyuki Miyazono and Ryouko Miyazono (Kaori's parents).

Ever since Kaori was a little girl, she and her parents have been fans of Kousei and attended all of his performances. After seeing Kousei play the piano, she begged her parents for a violin, in hopes that maybe one day, she’d get Kousei to play the piano for her. Since then, Kaori has been an admirer of Kousei.

When she attended Sumiya Junior High School, Kaori found out that Kousei was also a student there too. She wanted to speak to him, but because he was always surrounded by Tsubaki Sawabe and Ryota Watari, she couldn’t. When she realized that she didn’t have much time to live, she decided to up her confidence, by playing the violin in an unconventional way and wore contact lenses instead of glasses. Kaori first met Kousei in person at the park, when she lashed out on him after he accidentally took a photo of her just as a gust of wind blew her dress upwards.

After getting to know each other, they both realize that, as musicians, they have a lot in common. Kaori first discovered that Kousei became tone-deaf when he stopped midway, she asked him to play the piano in the café. She then appointed Kousei to be her accompanist. Although reluctant at first, Kousei finally accepted when Kaori begged him to support her in the “moment that she's about to lose heart”. Their relationship gradually strengthened and they start spending more time together, especially in the music room. Kousei found himself falling in love with Kaori but held back because he knew Watari was interested in her.

At the end of the series, in Kaori's letter, it is revealed that she had a crush on Kousei since they had been young and that she had lied about her crush on Watari just so she could be near Kousei. After her death, Kousei was depressed and accepted it. He continued to play the piano, due to her lasting impact on his life.

Watari is Kaori's supposed love interest throughout the series. Both of them are very close friends and tend to act lovey-dovey around each other. It is later revealed that she had a faked interest in Watari just to get close to Kousei. Watari was immediately infatuated with Kaori's appearance when he first met her, but still remained a ladies' man, chasing after other girls at school. Nonetheless, he is shown to care for her and visits her frequently when she is in hospital, bringing gifts and making her laugh. In Kaori's letter for Kousei, she claims that Watari was an amazing friend, but he will probably forget all about her; however, it is visually suggested that he really did like her.

Tsubaki is a classmate of Kaori’s who asked her to introduce her to Watari. Thus, Tsubaki ultimately gave her the opportunity to meet Kousei. Kaori tried to meet Kousei in such a roundabout manner because she knew that Tsubaki would not respond well if directly asked to be introduced; in her letter to Kousei, she mentioned that she knew Tsubaki was in love with Kousei from the very beginning. Both Kaori and Tsubaki can be seen traveling home together throughout their time together, and they are shown to be good friends. Tsubaki liked Kaori as a friend but realized her own feelings for Kousei after she noticed Kaori and Kousei's relationship developing. 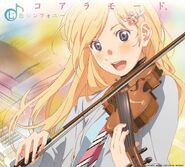 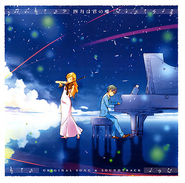 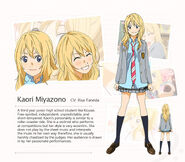 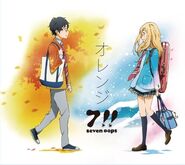 Add a photo to this gallery

Retrieved from "https://shigatsu-wa-kimi-no-uso.fandom.com/wiki/Kaori_Miyazono?oldid=18348"
Community content is available under CC-BY-SA unless otherwise noted.