Chapter 09: The Cassette Recording and the Moon

Episode 06: On the Way Home
Emi Igawa (井川 絵見 Igawa Emi) is one of the main supporting characters of Shigatsu wa Kimi no Uso. She is a pianist who competes against Kousei Arima and Takeshi Aiza. She is mentored by a pianist named Yuriko Ochiai.

Emi is a teenage girl of average height with waist length black hair that has bangs hanging above her eyebrows, reddish-brown eyes and a thin frame.

In her childhood, Emi had short hair tied in two high pigtails with red ribbons. She wore a knee length pink dress with frills over a white blouse with red ribbons tying the ends of the sleeves. She also had a large red bow over her neckline.

Her usual outfit is a dark red blazer and matching skirt and ballet slippers. Her blazer is left open, exposing her white collared shirt underneath. She also wears dark grey stockings.

The dress she usually wears at her competitions is strapless and a lighter and brighter red than her usual clothes. It reaches her feet and is larger from her knees. She is also regarded as "gorgeous" and cute.

In one episode she is wearing a red jumper, a black mini dress with black stockings and brown boots. When she is at home she wears a blue and a white t-shirt with brown cargo shorts.

At first glance, Emi often appears as an emotionless and distant girl who has a cool and mature demeanor, in stark contrast to her temperamental and emotional playing style. Despite her calm and level-headed reactions, Emi often has harmless mood swings while thinking, wherein she appears brash and eccentric.

Her moods swings usually depict her glaring at nothing, with a scary large brown stuffed bear with red eyes above her, and fire around her. Emi often stands with her arms crossed, and appears apathetic. She is often seen with Takeshi. She was described by her teacher as erratic and often lets her emotions spill easily, which influences her playing. Despite her cold and moody demeanor, she gradually warms up to Kousei and Takeshi, as seen before their last performances in the series.

Emi is one of the best middle school pianists in the story, on par with Takeshi Aiza. In the competition she took part in when young, the audience pointed out that she and Takeshi were much better than the rest, not counting Kousei Arima. Her playing style is emotional and temperamental, and she wishes to oppose the 'boring' style of music Kousei played when young. In her last performance, the audience was entranced by her performance, and even the judges were surprised by her skill and amount of practice. Kousei described her performance as very colorful and expressive.

She originally started to learn the piano after hearing Kousei perform for the first time. She was inspired by his passion and playing style. She wished to be a similar inspiration to someone else. While Kousei's playing style gradually began to turn more boring, Emi's got more expressive. However, when Kousei stopped playing the piano in the wake of Saki Arima's (Kousei's mother) death, Emi's piano performances became more erratic and her standards began to waver. Prior to Kousei's return, she struggled to retain her position as one of the best pianists around as her motivation, Kousei, was absent. She learns the piano under Yuriko Ochiai.

She also knows how to cook, play tennis, and has shown great skill in visual arts, receiving high praise from her art teacher.

Prior to the storyline, Emi and Takeshi Aiza are sitting together complaining about Kousei Arima after losing to him in a piano competition. The rest of the crowd points out that Takeshi and Emi are head and shoulders above the rest of the competition, which makes Kousei all the more invincible for beating the two. While Takeshi sees Kousei as a rival that pushes him to greater heights, Emi has a different motive. She was originally inspired by Kousei's passion and pure innocence during his first performance, she was so enthralled after his performance that she started crying which made Kousei think that she did not like it making him walk away from the stage ashamed. She decided to learn piano under Yuriko Ochiai for the sake of expression. Over the course of the story, Emi seeks to oppose the "boring" playing style of the old Kousei in hopes to find the "true" Kousei once again.

As Kousei Arima is climbing the stairs at Towa Hall to enter his first competition for two years, he finds Takeshi Aiza and Emi standing near at the top of the stairs. Takeshi wonders if it's really Kousei, and Emi says it is. He interpellates him, but Kousei doesn't seem to recognize him.

Later, in a green room, Takeshi is ranting about how Kousei forgot them, and Emi calms him down, saying that he should get changed because he has an early start time. She thinks that he didn't forget them, he never knew them in the first place, and that he's exactly the same as before. She gets angrier and has a mood swing, thinking why he plays nothing but 'boring music' despite having so much skill.

As the constestants start performing, the two stand in front of a monitor, looking at the performance. Takeshi tells Emi about how he always felt weak and inferior to Kousei. Emi says that she's been waiting for this moment. Soon, Takeshi leaves to get ready for his performance and Emi remains alone, watching his performance. 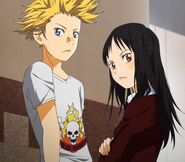 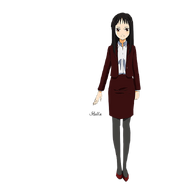 Emi in her school uniform on the competitors’ list

Emi denies that she’s at Towa Hall to watch Kousei